The PPE Shortage Past, Present, and Future

At the start of the COVID-19 pandemic it became clear that a shortage of PPE (personal protective equipment) would become hugely problematic for both the healthcare sector as well as individuals looking to protect themselves. This shortage has had ramifications not only for governments experiencing the worst of the pandemic but has had an impact on the entire world stage. While the state of affairs when it comes to certain PPE have improved since their first decline, the availability of medical gowns and nitrile gloves for healthcare organizations is still abysmal.

PPE in the United States and Canada

Since PPE was not previously manufactured in the US and Canada, North America has had to rely on facilities in countries such as Malaysia, Vietnam, and China. The competitive nature comes into play on these resources since the demand for them is not just local, but worldwide leading to cutthroat competition among companies and nations. The demand for these items skyrocketed overnight, increasing their demand by an immeasurable factor.

The first signs of the shortages to come started in both medical and retail – on the ground, cautious customers were buying entire stocks of gloves, masks, and preparing either for personal use or for the potential for short-term reselling and price gouging, although the phenomenon was short-lived and has been stamped out for the most part. As medical facilities ran out of N-95 masks, orders increased leading to unprecedented events in the supplier market.

At the peak of the problem, established supplier and medical facility relationships began to deteriorate as suppliers began to cancel incoming orders that had already been agreed upon. Instead, suppliers were choosing to reroute incoming shipment to organizations that were outbidding the competition and had cash in hand. Additionally, PPE shipments that may have been en route to retail locations were withdrawn and sold to medical suppliers who were in dire need of stock.

During the time in which COVID-19 first became prominent in China there were a number of municipal and governmental directives in China that would shift the outcome of the PPE shortage war and the battle on COVID as a whole. The first signs of distress was an order sent by Chinese corporations to seize shipments of PPE headed overseas and ask for the immediate return of the supplies with full refund. The second measure taken by the government was an overseas PPE buyback system where Chinese citizens were able to purchase all PPE stock at retail locations in any country and resell them to China for a 30% markup.

As the pandemic spread over multiple countries and continents, the cost of shipping supplies worldwide greatly increased. This is in part due to the fact that passenger flights double as commercial flights for shippers looking to utilize the extra cargo space in airplane compartments. Because passenger flights halted almost completely, shipping companies like UPS, FedEx, and DHL were able to step in and continue integral shipping but at a more limited rate. Air freight shippers were overwhelmed with the number of orders and had to be highly selective with their services.

What Does JG Medical Do?

With the fight for PPE ongoing, we’ve adopted new strategies to acquire resources that would otherwise be impossible to get a hold of. Firstly, we work directly with China, Malaysia, and Vietnam to buy PPE at the source of manufacturing. We have employees on the ground knocking on the doors of factories and making offers directly. By doing so, we can bypass the bidding war that’s occurring between major suppliers and producers. Additionally, there are manufacturers who previously did not supply medical PPE but have shifted their company orientation to develop PPE products to meet the impossible market demand. One such example is a plastic bag manufacturer that we have a relationship with who redesigned their production line in order to make sleeved gowns that meet level 3 PPE requirements.

The problems that have arisen as part of the PPE shortage problem are felt worldwide and effect doctors, businesses, organizations, and the general public. By having feet on the ground where the manufacturing happens and being a part of new and innovative developments on the part of companies looking to pivot their product development, we’ve been able to fill some of the gaps left by the shortage and help as many as we can. 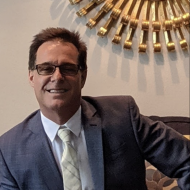